yesterday Sam and i went on a drive to the other side of Belgium, it is a small country, and usually we d go west towards the North Sea, but this time, we decided we d go east to Tongeren in the province of Limburg which is very close to the Netherlands - German border.

i had heard of the Gallo-Roman museum a few times, and it often is a destination for school study trips, but since i grew up in Japan for most of my schoolgoing years, this was a first for me.

the drive itself took about an hour, as i said, we live in a small country, and it takes about an hour to get to the seaside, so it didn t seem long at all, especially because the scenery is quite different from what we were used to. the area is very famous for its orchards and even for a few vineyards. 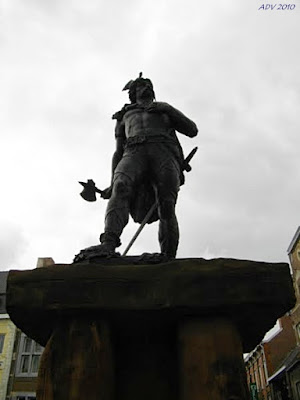 statue of Ambiorix in the center of Tongeren

however, our destination was the museum, where one can experience a walk through the ages from when the first nomads came to settle here, to the Eburone Germanic and the Roman periods. it was quite fascinating to see what we humans were already producing then... and incredible to see the workmanship as well.

as you would expect, i was most interested in the type of jewellery they wore, which, i learned, was at first more to protect against evil spirits (like, even now, many nomadic tribes do ie. wearing talismans to protect against the 'evil eye') and slowly but gradually became more of a status-symbol like we wear these days...

but the craftmanship of the goldsmiths of those days! to make something as beautiful and lasting without the means and the tools that we have today is simply amazing. the simple (some might say 'naive') but at the same time wonderfully complex designs, that still baffles someone living in the modern world like me... wow.

if i can find, somewhere inside myself, a little bit of this gift that these craftsmen/women had, i will count myself very lucky indeed.

i took only a few pictures of some pieces just because they spoke to me, but i have included a link to the website of the museum. 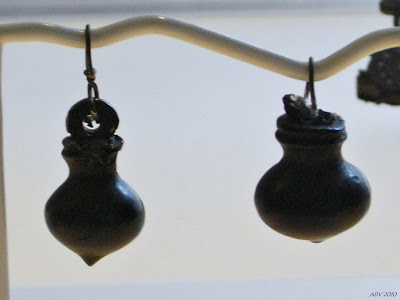 a pair of earrings in English jet

remember Commodus? if you don t remember your Roman history, he was the son of Marcus Aurelius, and depicted as the anti-hero in the movie Gladiator. this gold seal ring depicts him carved in the lapis lazuli stone 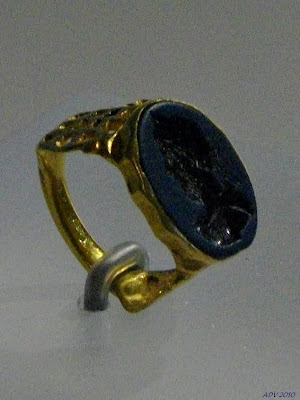 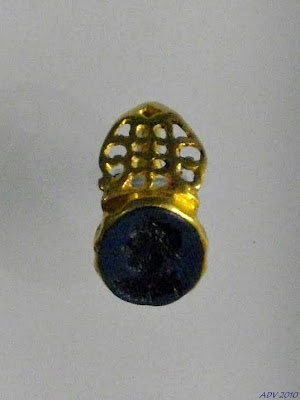 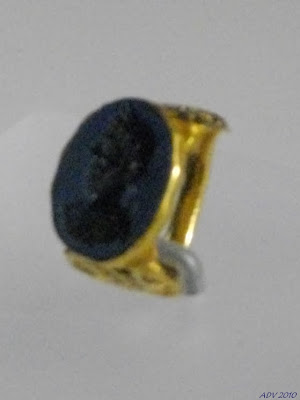