there was once a giant named Druon Antigoon, who guarded a bridge on the river Scheldt and exacted a toll from any sailor who wanted to pass. anyone who refused to pay this tax would have his hand cut off by the giant, who would then throw it into the river. but then a man named Silvius Brabo fought Antigoon, and won, and also cut off the giant s hand, which he then threw into the Scheldt.

and thus Antwerp got its name: hand(hand)-werpen(throwing), Antwerpen.

or so it is told.

Antwerp is and always has been a multicultural city. due to its ideal location right on the river Scheldt, easily reached from the sea as well as the land, there have always been merchants and traders from all over Europe and even further away.

(...) "Nowhere else in the world are strangers more free in their commerce and life as in Antwerp, and in the whole Netherlands, resulting in the wonderful mix, people of all walks of life and nationalities, and that one hears an incredible amount of different languages being spoken. (...)
Above all, due to the many foreigners living in Antwerp, one is constantly kept up to date on world happenings." (...)

this also meant, and it still does, that all religions are represented here in this little but grand place.

having grown up amongst many other 'internationals', and being half Belgian and half Japanese myself, this city also speaks to me.

so i had to make this hand. 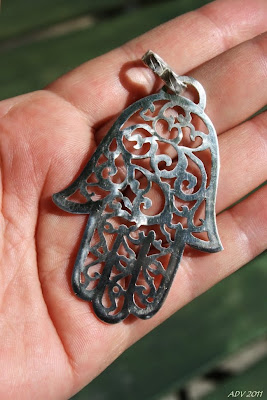 some call it the 'hamsa' or 'khamsa', a symbol to ward off the evil eye, the Hand of Fatima or the Hand of Myriam, some believe it stands for the five pillars of Islam, for others it may bring good luck, and then for still some others it may even represent a 'mudra'...

i am not a particularly religious person. but i believe there is something that is more than us, and brings out the best in us.

i may be wrong, or just an idealist. 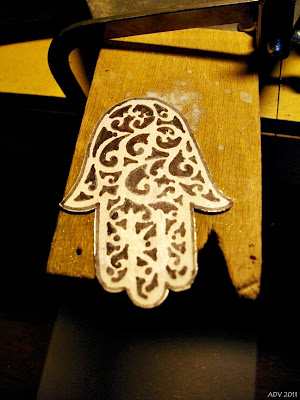 first i made a template 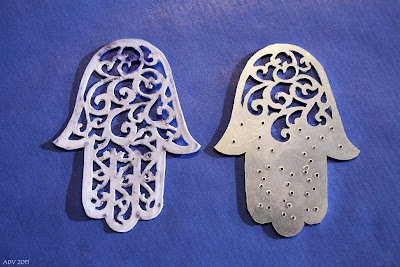 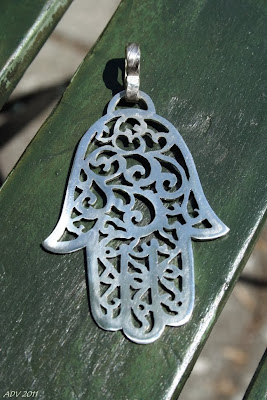 (i had been a little too quick to saw the hand and forgot to saw out the eye for the bail, which i then had to fabricate separately and solder on, but that worked out fine) 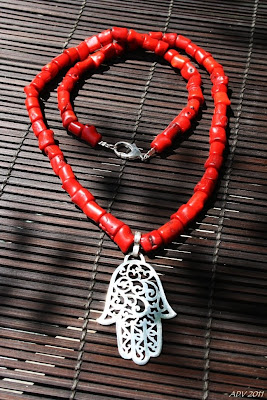 i then made this necklace, and i liked the red. but the beads had been tinted and that wasn t a nice sight. 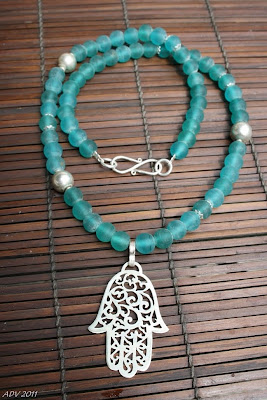 so this is what it has become.

it represents humanity to me.

oh, and on a serious note, Antwerpse handjes, also available as chocolates and cookies.